Depending on the day you ask, my top five Disney films are: Beauty and The Beast, Aladdin, The Lion King, Tangled, Frozen. As much as I appreciate the older classics, you can tell I was born in the 90s. The Fates were on my side last week as I met a Finnish girl who, with her annual pass, could get me into DisneyLand for the lovely little price of 21€ on Sunday. I have been to the American parks in Florida and California but it was over ten years ago and now that I am A Grown Up, it was time to relive the magic. If you are a Disney-sceptic, please be so kind as to turn back now because what follows will be unabashed enthusiasm for everything.

Since my friend was an expert, we had a complex plan involving Fastpasses and Tactical-Park-Moving that I've completely forgotten but that meant that we easily saw everything we wanted to, even leaving time for a leisurely cocktail. Turns out I love a good adrenaline rush and my highlights were The Twilight Zone Tower of Terror and The Rock 'n' Roller Coaster. But the smaller rides are still pretty awesome with special shout-outs to the Le Carrousel de Lancelot and Blanche-Neige et les Sept Nains. Just like the names of the rides, the whole park is in a mixture of French and English which was fun. The French C-3PO is pretty charming.

The park quietened down as it got darker so we made the most of it with a peaceful wander through La Cabane des Robinson which was the Best Tree House Ever and if they posted it on airbnb, I'd be there. It all felt so magical at night with the copious amounts of fairy lights and instrumental music. We settled down for the fireworks show. If you don't well up then your heart is frozen cold and we need to get you to Pabbie, the troll king, ASAP.

A Mouzaïa wander and a Buttes Chaumont picnic

At the recommendation of one of the women that I live with, I grabbed my camera and spent an hour exploring the unusual neighbourhood which centers around Rue de Mouzaïa. Behind concrete tower blocks, you can find this little haven of flowers and felines. There were no tourists, and I even got some funny looks as these Parisians are certainly not used to having their territory snapped.

This area makes a fun change from the beautiful (but repetitive) Haussmann style of central Paris. Little pedestrian alleyways run off the main street and meandering up and down them, you'll find cute gardens and houses better suited to a village far away from the capital. There are plenty of helpful signs warning you about the dangerous and savage animal population, so thankfully I knew to watch myself around this wild cat.

I saw families playing in their gardens which is certainly something you miss in the city where a private garden comes with a hefty price tag. The charm is in the detail so this is not a place to visit if you're in a rush but is a great add on if you're heading to the Parc des Buttes Chaumont. As I happened to be...

I had been invited to a little picnic and so four ladies gathered with wine, bread, cheese and radishes for a thoroughly French meal. We nattered away until dark, until we were kindly welcomed back to one of the girls' pad for snuggles with her cat. Lots of wine was had, and the next morning, I had about 50 blurry photos of that cat. A good time indeed.

Les tous petits plaisirs. If you haven't seen Amélie, you need to correct that immediately and learn to enjoy the small pleasures in life. Such as skipping stones on Canal Saint-Martin. My classmate very wisely proposed a picnic by the canal last weekend and so we ate our Sésame bagels, chat about life and watched the world go by. A gorgeous afternoon, enjoyed with many Parisians. Protesters marched past, stylish kids scooted along and boats passed through the locks. Simply charming!


My weekend in Paris was finished with Roger Mitchell's Un week-end à Paris, newly released here in France but came out in the UK back in October as Le Week-End. I was completely enchanted by this film. Beautiful shots of Paris, a honest look at a long-term relationship, and quiet humour. I loved the throwback to Godard's Band à Part and I now dream of recreating the dance scene in a little bistro. It was a film that I wanted to instantly see again once the credits rolled and think if, like me, you enjoy New Wave films, Jim Broadbent or Jeff Goldblum do not miss this! 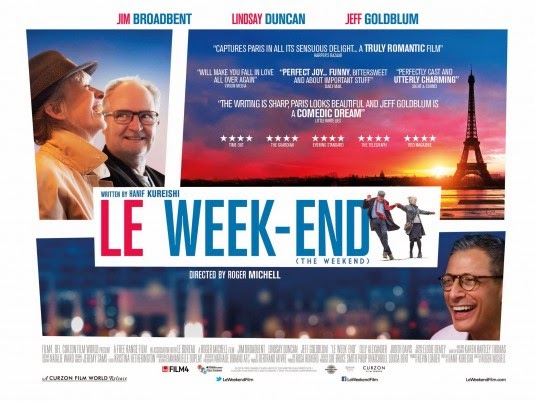 The wind in my hair, speeding around little street corners, pinging my bell at tourists - Paris on a bike was certainly a tempting idea for a Sunday morning in springtime. Except, bicycles are deathtraps. Whilst I love them, I am not a confident cyclist and still have a lovely scar from my tumble in Pushkar. So, thinking safety in numbers, I signed up with the Blue Bike Tours company for a 'Secrets of Paris' tour.

I can't recommend them enough. Our guide Sonia was as cute as a button, gave me such fab Paris tips and we had a lovely little ride around the Latin Quarter and the Marais. I felt so safe on my bike (who was named Marie Curie) and afterwards I was pretty convinced that Paris is a great city for cycling.

We began at Gare d'Austerlitz then set off along the canal before we stopped on le Pont de l'Archevêché, otherwise known as one of the Love Lock Bridges. I have never added a padlock to one of the three Parisian bridges that lovers grace with their padlocks. I think it's a cute idea however I've also heard that the bridges aren't really build to withstand that kind of weight so... falling into the Seine, not such a cute idea. But it looks cool.

Staying rive gauche, we went to every tourist's favourite bookshop Shakespeare and Company. Now, this shop is awesome; it has little nooks and crannies perfect for reading, typewriters, hidden (and-not-so-hidden) notes and a lovely cat. But it is also very expensive and very touristy so prepare to use your elbows to get to the good bits.

The tour circles around the Latin Quarter and Sonia gave us lots of brilliant little factoids and stories. We finished in the Marais and walked our bikes through the unusually packed Place des Vosges where the sun-worshippers had flocked.  The tours lasts about four hours with lots of stops to take photos and a longer stop midway for a lunch. I was joined by a Welsh couple and a Parisian family of five so with only eight people you don't feel like too much of a peloton. Highly recommended, next step is braving the Vélib...

Jardin des Plantes: home to a thousand and one orchids

To profite bien du soleil, after my classes I headed to the Jardin des Plantes to soak up the vitamin D along with every other Parisian with a lunch break. This garden has a pretty rad history, thanks to the little Menagerie. This zoo housed all the animals that survived the French Revolution in the Royal Menagerie of the Château de Versailles, although most had been eaten or sold. Whilst it was being constructed a lion, a polar bear and a sheep (amongst others) had to live in harmony in the basement of the museum. When it was finally ready, visitors apparently spat at the lion and yelled obscenities at it since it represented the guillotined Louis XVI, and he too, was once the king of the jungle.

However, not one to release my anger on wild animals, I popped into the Mille et une Orchidées exposition to admire the crazy selection of beautiful orchids. I was definitely the youngest person there by around 65 years, however since watching this awesome video about Marianne North, I have decided that flowers are basically The Best Thing Ever for a young lady to enjoy. Transported to the Tropics I wandered the expositions in an absolute daze - the sudden warmth, the sweet smells and the complete confusion of having just stepped out of Paris and into a jungle. Magical.

On a rainy afternoon in Paris, what could be nicer than a spot of afternoon tea? A very international group of twenty-something girls met in the Galerie Vivienne, one of the many hidden passages in the second arrondissement. In the 18th century, these passages were popping up all over the city, turning it into a shopping labyrinth. Of those that survive, some are definitely of the shabby-chic variety but the beautifully preserved Galerie Vivienne's amazing mosaics and grand architecture transports you back to the belle époque.

We headed to A Priori Thé (a nice French pun to show that tea is an absolute priority) for small talk and scones. After indulging, I wandered off with a Swedish dancer I had just met to explore and admire the curiosities in the windows of Galerie Vivienne and other passages in the area. If you fancy a little window shopping away from the tourist crowds, this is the area to delve into - old maps, faded books, retro toys and lots of lovely treats.